Insights, news and everything else building records.

published on August 10th 2018 | by Laura Andreescu
In this article: 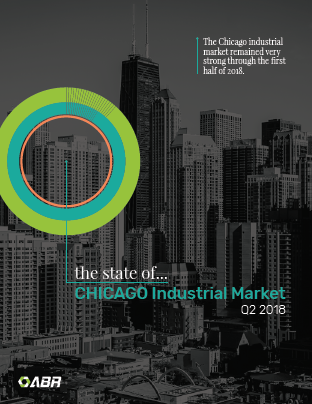 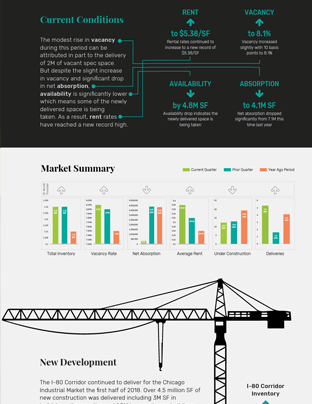 The State of the Chicago Industrial Market

The Chicago industrial market remained very strong through the first half of 2018. Even though vacancy increased slightly and the market’s absorption was lower than usual (according to Newmark Knight Frank research), the asset class is still performing well. There are signs that the Industrial Market is nearing an end to its record-breaking pace. But Chicago is still on track for another record-breaking year.

The modest rise in vacancy during this period can be attributed in part to the delivery of 2M of vacant spec space. But despite the slight increase in vacancy and significant drop in net absorption, availability is significantly lower which means some of the newly delivered space is being taken. As a result, rent rates have reached a new record high. 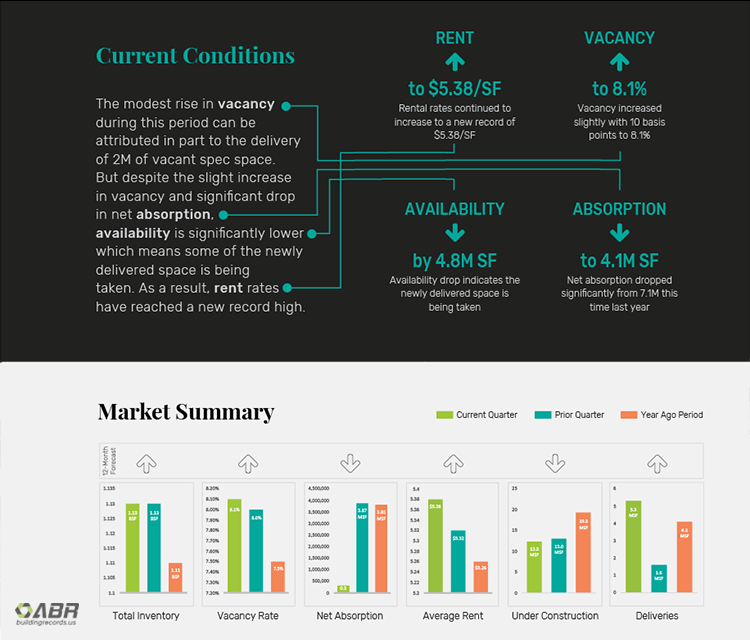 The I-80 Corridor continued to deliver for the Chicago Industrial Market the first half of 2018. Over 4.5 million SF of new construction was delivered including 3M SF in build-to-suit properties and 1.5M in vacant spec buildings.

The build-to-suit space was completed by:

Two new spec properties were also delivered and remained vacant through the end of Q2:

This was a significant amount of space delivered for the I-80 Corridor. The inventory in this area went up by almost 20M SF in the last 5 years. Unless tenants commit to these spaces, the vacancy rate will continue to rise through the end of the year. 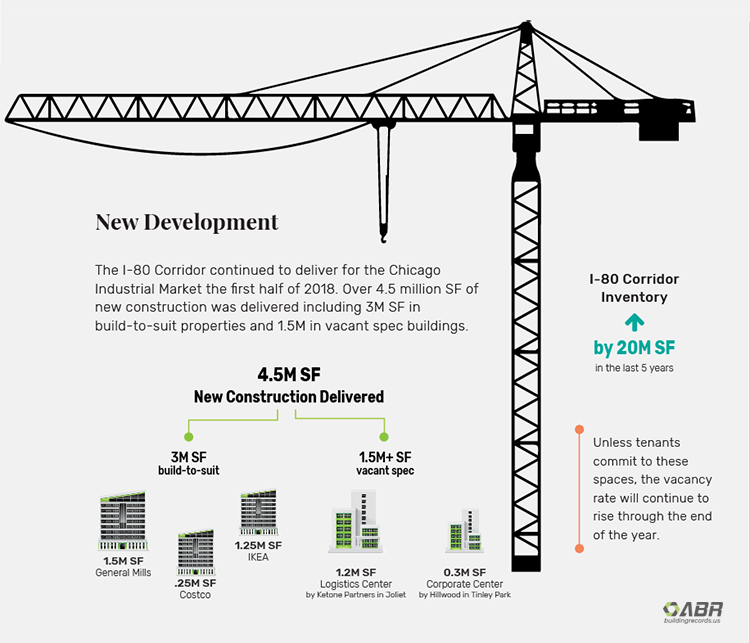 There remains a shortage of cold storage facilities, mostly because the construction costs for these properties can be up to 4 times higher than for general industrial space.

Researchers at Newmark Knight Frank believe that tenants seeking cold storage facility space need to set aside enough time for what could be a lengthy search.

The Chicago industrial investment sales market showed no signs of decelerating through the first half of 2018. At the end of Q2 2018, the Chicago metro area has completed over  1.6 Billion in investment sales - a 27.6% increase from the same time last year.

Investment sales completed by end of Q2 amount to 1.6 billion which represents a 27% increase from this time last year.

Duke Realty registered one of the largest individual property sales during this period. Yusen Logistics purchased 212,000 square feet for $24 million or $117 per square foot.

Also final during this period was Blackstone's acquisition of he Canyon Industrial Portfolio. This portfolio consists of 146 buildings - last-mile, warehouses, and distribution centers. Tenants in the portfolio include Amazon, FedEx, Coca-Cola, and Fiat. The transaction completed at $1.8 Billion and included 4.1M SF in Chicago.

Other select sales during this period of 2018 include:

Most notable lease transactions during this quarter: 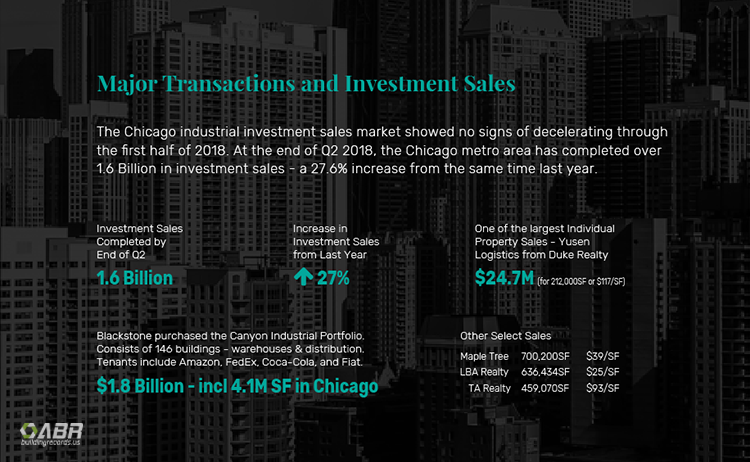 Unemployment rates continue to fall, causing a shortage in skilled labor. In May, Chicago's unemployment rate fell to 3.3% from 5.6% in January. According to the Bureau of Labor Statistics, almost 25% of manufacturing industry employees are close to retirement. As a result, finding people with the right professional and technical skills is challenging.

Although Chicago's population is declining, there is one demographic set on a growth trajectory - the high-income population.

These factors indicate a talented, educated workforce. For the industrial sector, this means increased demand for last-mile facilities in the Chicago area. 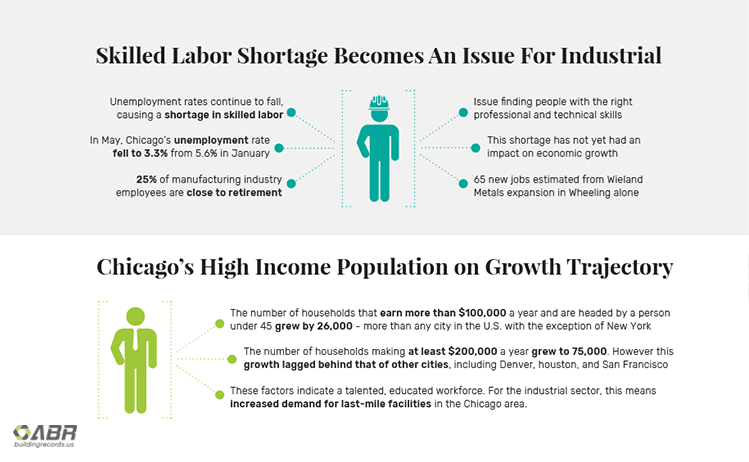 Chicago has one of the largest, best-performing, and most diversified economies in the world.

With the investment sales market outperforming were it was this time last year, Chicago could have another record-breaking year. The skilled labor shortage will remain an issue for certain industries, such as manufacturing and distribution. Nevertheless, the Chicago Industrial Market will continue to see demand for high-quality, well-located space. 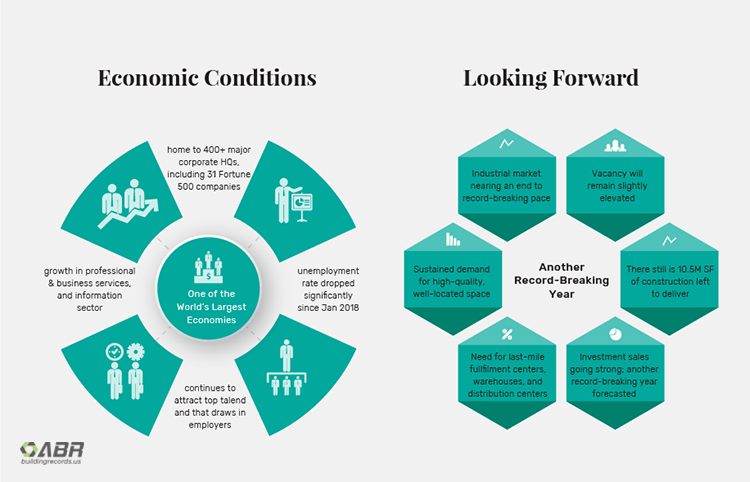